Let's Call the Whole Thing Off

The other day, I was walking into the bank, and I had a passing thought,

"I should just clear out our entire bank account."

Ha.  I had to chuckle at the thought of poor Tim's face looking at all the zeros in our balance.

Then I thought, I could leave because, technically, my car is in my name.

I want to be very clear here before you start worrying about how this story is going to end.

I was not upset.  I was not mad. I was not unhappy.  Quite the opposite, actually.

I just had The Glumps.


They were the 14-year-old-boy Glumps where all you want to do is lie on the couch playing xbox, ditching your responsibilities, and eating someone else's hot pockets.

You don't want to go to The Post Office.

You don't want to return that skirt you said you'd return 3 weeks ago, and you CERTAINLY don't want to spend money paying down your credit card debt.

I imagine the 14-year-old-boy- Glumps look a little something like this. 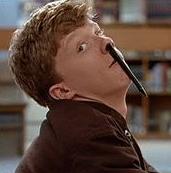 Anthony Michael Hall photo courtesy of nerdarama.com
I was thinking about Going Somewhere.  Anywhere.  At that point, New Mexico sounded pretty good to me.
Yick for responsibilities. I say, Yick.
Bring on the xbox.  (Ok. We don't even have an xbox, but I think you know what I mean).
Then, I walked out to the parking lot and saw a man wearing a t-shirt that simply said
submit to it.
That was all it said.
I simultaneously wanted to hug him and punch him in the face.

I started thinking about Proverbs 31- what God has said about being a good wife.  I don't think it is "easier" to be a husband.*  I just think it is less detailed.  Less complex.

Love me.
Lead me.
Provide. Protect.

Whereas being a wife?  Holy cow.  There is an entire section of The Bible dedicated to helping women understand how to be good wives.

Be resourceful. Work hard.  Get up early.  Be generous.  Be wise. Be prepared.  Manage your time.

Oh yea. That's right.  I know there are a lot of women out there who balk at that word.  Submit.  Before Tim and I got married, our pastor at the time (who is awesome), said that when you submit, you pledge your allegiance to someone or something.

And I really loved that.

But I also think it is about giving yourself over to something that is greater.  Running a household.  Being responsible.  Going to the stupid Post Office at 4 o'clock the evening before a major holiday. 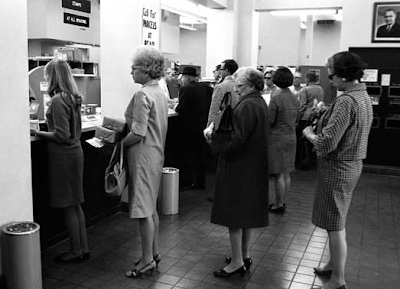 It's about acknowledging that being a wife and having a good marriage is dang hard.  You will drown in the details of those verses.

Unless you are willing to sacrifice.

Unless you know how to submit.

Love and some days are better than others,
H.

P.S. A note for Tim:
I am not moving to New Mexico because gas is expensive. Plus, I would be terribly sad to wake up with no tiny beasts weighing down my covers and you are the only one who knows how to make The Best Omelet Ever. And I would miss you.
And there are scorpions in New Mexico and (pardon my grammar)but  I ain't havin' none of that.

*For the record, I think being a Husband is way harder than being a
wife because when the zombies attack-  let's face it, Tim Young and his ferocious white beast will totally be the ones climbing out of the
attic to get more chips & salsa.  Unloading the dishwasher, I can handle.  Fending off The Undead? No thanks. 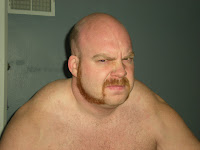 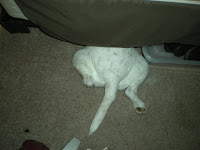 Thank yo so much for this! I love finding these little pieces of insight all over the internet to help out marriage newbies like myself. I too find myself every now and then with a case of the Glumps (although I'd never had a name for it before.) Thinking about this next time might be the remedy.