It is funny how you can take a break from blogging, and then when you start, the floodgates open.

I am taking part in an online Community Group, and one of our writing challenges was to finish the  prompt, "The first time I..."

This is a post about "The first time I predicted the future."

I was going to say, "The first time I knew you were The One..." but then I heard the sound of a thousand people gagging collectively and decided that title was just too sweet.  Tooth-achingly sweet. Ha.

In some ways, it was hard to fathom, and in other ways it didn't seem like That Tall of An Order.

I pictured someone with a guitar strapped to his back holding a cup of coffee and playing soccer with a group of kids.

How ridiculous is that? Am I right? In fact, I'm even embarrassed to type that.

For a while, I thought about it kind of a lot, and then I graduated from college and once I was no longer in that private, Christian College environment where the pressure to have a relationship/get engaged feels HUGE, it never crossed my mind again.

We weren't engaged yet, but we had been dating for a while.  Being in our mid/late 20's by that time, we knew pretty early on that we weren't going to continue dating if we didn't intend on getting married.  So.  There was that.

We were attending a church plant that met in an Elementary School.  Tim was playing in The Praise Band, and I was singing, occasionally.  As a church plant, every Sunday, we participated helped by "tearing down" service.  Chairs and tables were put away.  Microphone cords wrapped.  Speakers dismantled.  On and on.

One particular day, we had parked in the side lot. (I don't know why that's relevant). I was leaving ahead of Tim and stopped to chat with a few other people who had gathered at the exit.  I turned around to find Tim behind me...with his guitar strapped to his back...holding a warm beverage...kicking a soccer ball with a group of kids.

My heart stopped (in a good way) as that long-tucked-away memory came rushing back.

Isn't that the craziest, cheesiest thing ever?

What are the chances that all those elements would come together?

So.  Then we got married and that's that.

I am like...58 different kinds of embarrassed just publishing this, and I don't know why.  I have never told that to anyone ever...except for Tim, of course.

Well. So.  When life starts to get a little nutty, I think about all the "things" I have been given that have TOTALLY EXCEEDED my expectations like That Tim and These dogs and The Lu's*, and I remember to not get so freaked out.

Because The Lord wants good things for us.

*My niece and nephew are named Lucy (3) & Lucas (3 months), and my sister and her husband have started calling them "The Lu's" and I think it is the cutest thing ever.

Have a great weekend, my friends! Thanks for sticking with me!

Love and little hearts in my eyes,

Tonight, I took “us” on a date (meaning me and the dogs). Tim has been absolutely slammed with work and I feel pretty sad/conflicted about that. It is great for business. Bad for “us.” He is currently at a meeting at church, and when he gets home, I'll probably squeeze him pretty hard, but I'm sure you already knew that.

“What I Did Over the Weekend...” By: Holly Young

But. Just stick with me, I guess. I mean. You've already gotten this far. ;)

So. I decided we were going to Starbucks and The Dog Park even though I really wanted to stay home and feel sad for no real reason at all. Which sounds weird, I know. Sheesh. Women. Am I right?

The dog park is my favorite place. It was our first visit of the season, and it just feels so good to be back.

When we got home, I decided to take my bike out. I really, really love riding my bike. Our neighborhood is good for bike riding, but it's not a “through” street, so it's pretty tiny.

At the entrance/exit of our neighborhood, there's another street that pretty much connects two busy “highways.” They're not really highways.  "State Routes," maybe? Am I a civil engineer? I don't know the correct terminology for these things.

I never venture out there on my bike because I'm terrified of getting hit. It's a pretty narrow road, and people are in a hurry because...America.

As someone who has “been there/done that” before, I feel like that fear is justified. You know. Rational. It doesn't keep me from doing any day-to-day activities, but my brain, as an act of self-preservation, is always like, “Hey. Let's not go there.”

I 100% support NOT getting hit by cars while riding bikes.

But. Tonight. Guys. I found a short cut. A glorious- non-busy-non-street short cut over one crosswalk and a few “back” parking lots. They're all connected! Connected, I tell you! There's even a little “flashy” caution sign at the crosswalk because it connects buildings associated with a church/school. It is a formerly-hit-by-a-car-now-trying-to-take-courage-bike-rider's dream come true!

After almost six years, I've now opened up an entirely new neighborhood! And the street names! Oh, the adorably quiet street names! “Pinewood Trail” and “Chestnut Court!*” I think I only saw four cars the entire time I was out.

So. There you have it. People say when you are afraid, “The only way out is 'through.'”

Maybe sometimes, the only way out is “around.” 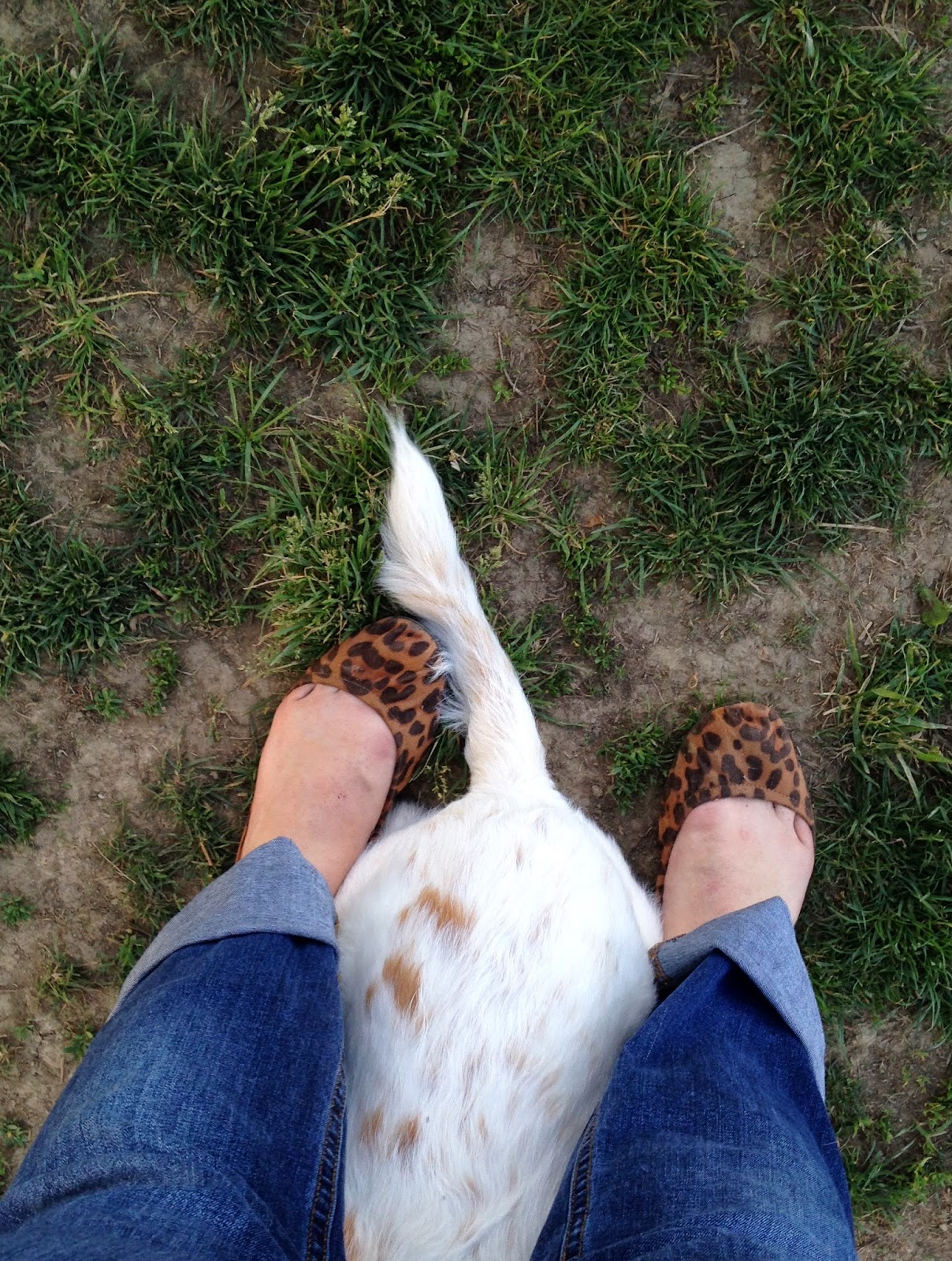 *Hi. These are not the real street names near our house, but you get the idea...because...let's be honest. You could be an ax murderer. I like you. Really. I do. But...nobody looks at a person and says, “Hey. That person could be an ax murderer. Let's not give them our address via the internet.” Am I right? I like you. I just don't want to make it any easier for people to make themselves a coat out of my skin.

I feel like I just took that too far. But. I'm keeping it anyway.

Love & if toe cleavage is wrong, I don't want to be right,

May 6th is one of my favorite days. On May 6, 2005 I was in a really ridiculous accident. (I don't know what a psychologist would say about this, but I feel like it's really important to me that you know it wasn't my fault. Ha.  Sometimes people just make bad choices and we suffer as a result).

With that being said, today, I am 9 years accident free, and I am pretty excited about that.

Getting out of Georgetown (scene of the crime!) actually really helped in a way that both saddened and surprised me.  Sometimes, you just need "out," you know?  Every once in a while, an older kid would mention it.  It's fine. Really.

For the most part, no one really picks at those locks anymore, and I'm grateful for it.

I always look forward to this day.  It's like my own, personal holiday and I try to do something special.  Today, I got to do everything I wanted.

I have said this a million times.  The time period of 2012-2013 was a real bummer.  Around this time a few years(ish) ago, I took a personal day and went to the zoo with Lucy & my sister.  If ever a personal day/trip to the zoo was needed, it was that day.  My goodness.

Once again, today, I got to be The Special Guest when my sister and her kids went to the zoo.

Just for fun, here are some photos of previous years. 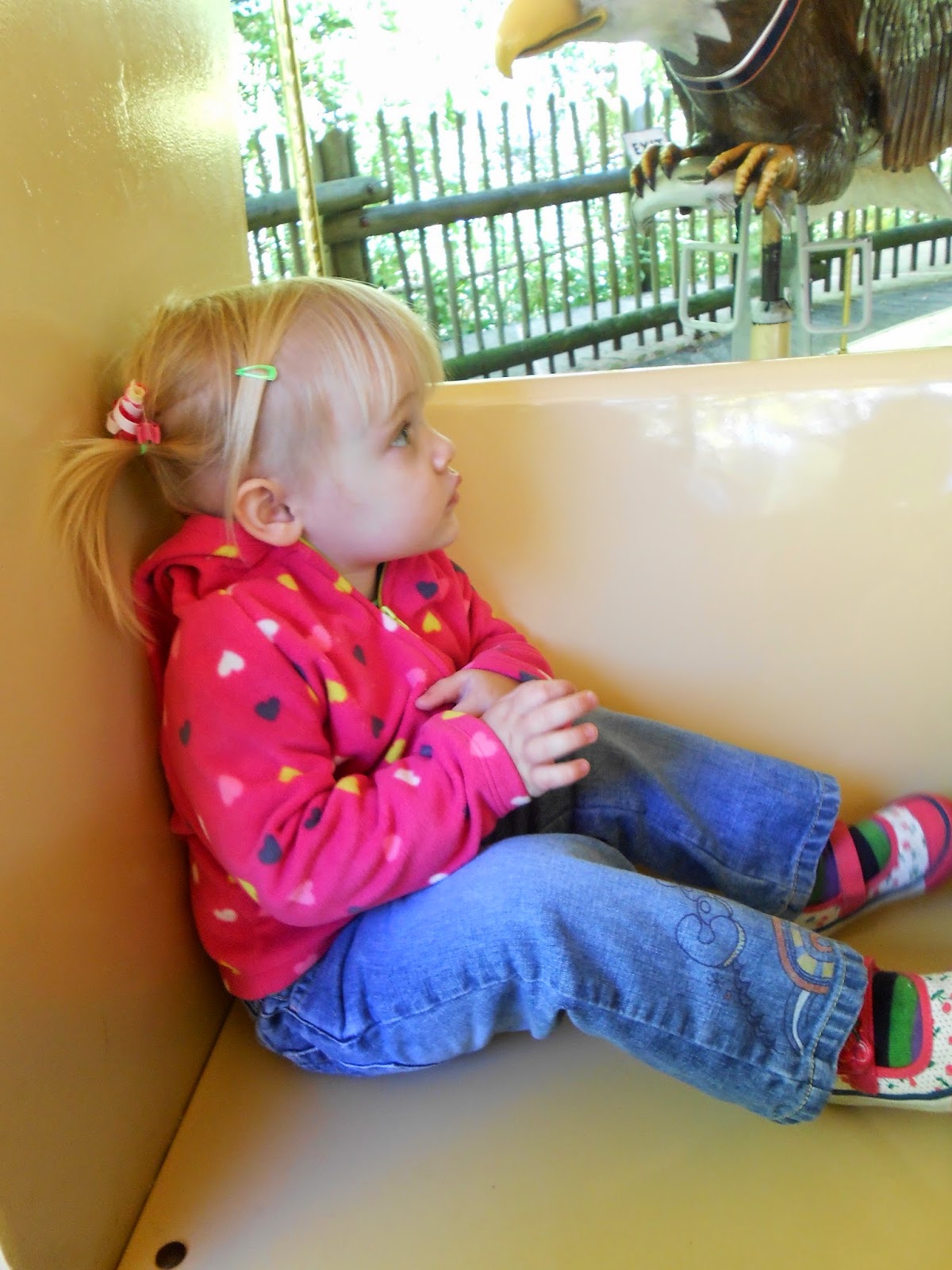 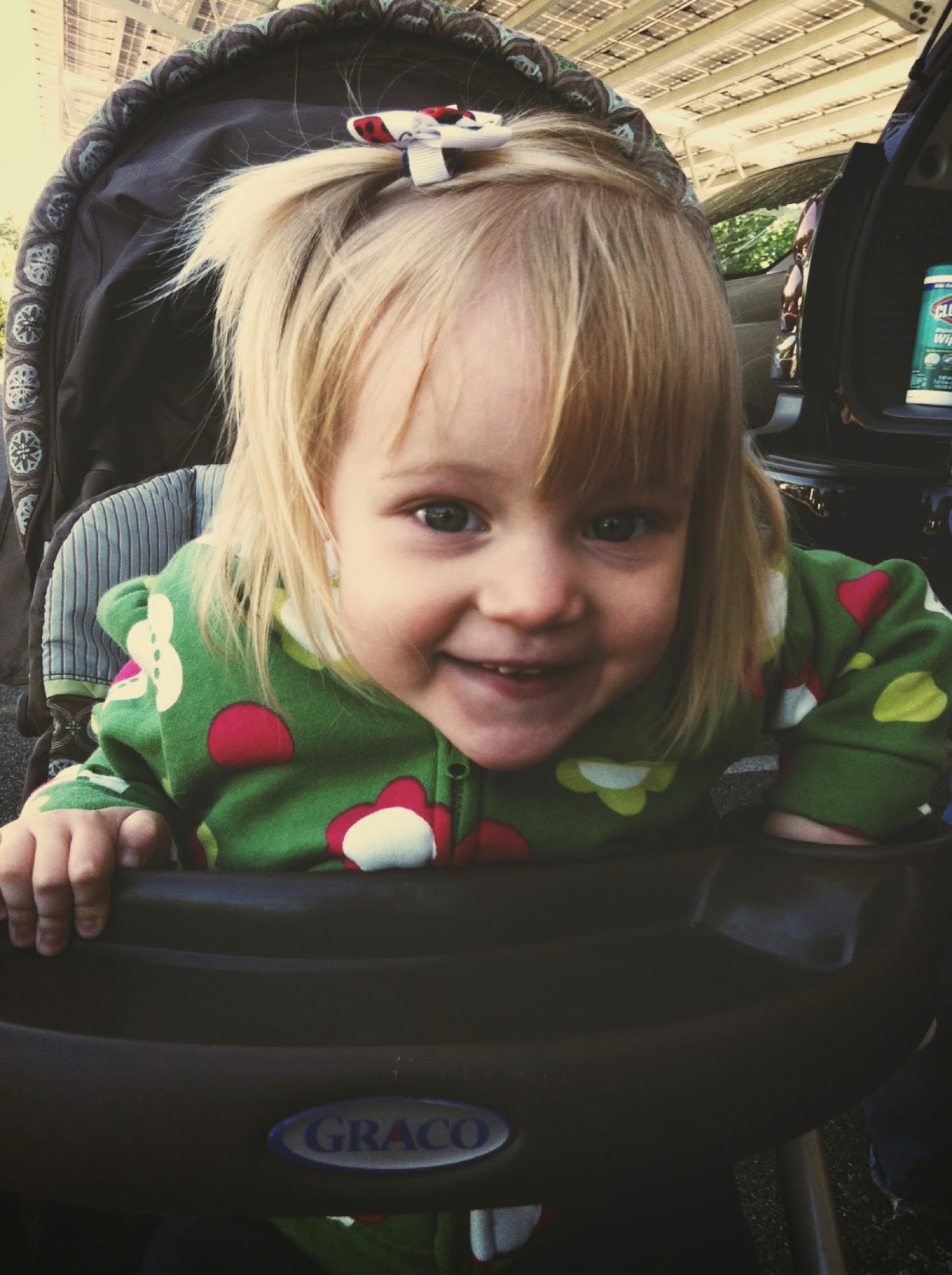 It was so good being back at the zoo knowing that not only had I survived the last hard year or so, I had come out on top.

So.  Between remembering my last trip to the zoo & today being what it is, I gushed all day.  I gushed and gushed.  We had been there for five minutes...we hadn't even gotten out of The Zoo Shop*, when I was like...almost in tears (happy tears).  We met a woman holding a snake named "Dune," and Lucy (3) petted her (the snake, not the woman) with "two fingers" like the zoo worker instructed and it was the sweetest, cutest thing in the history of this entire planet and already (in my head) I was like,

"Auntie Holls (that's me), you have to hold it together." 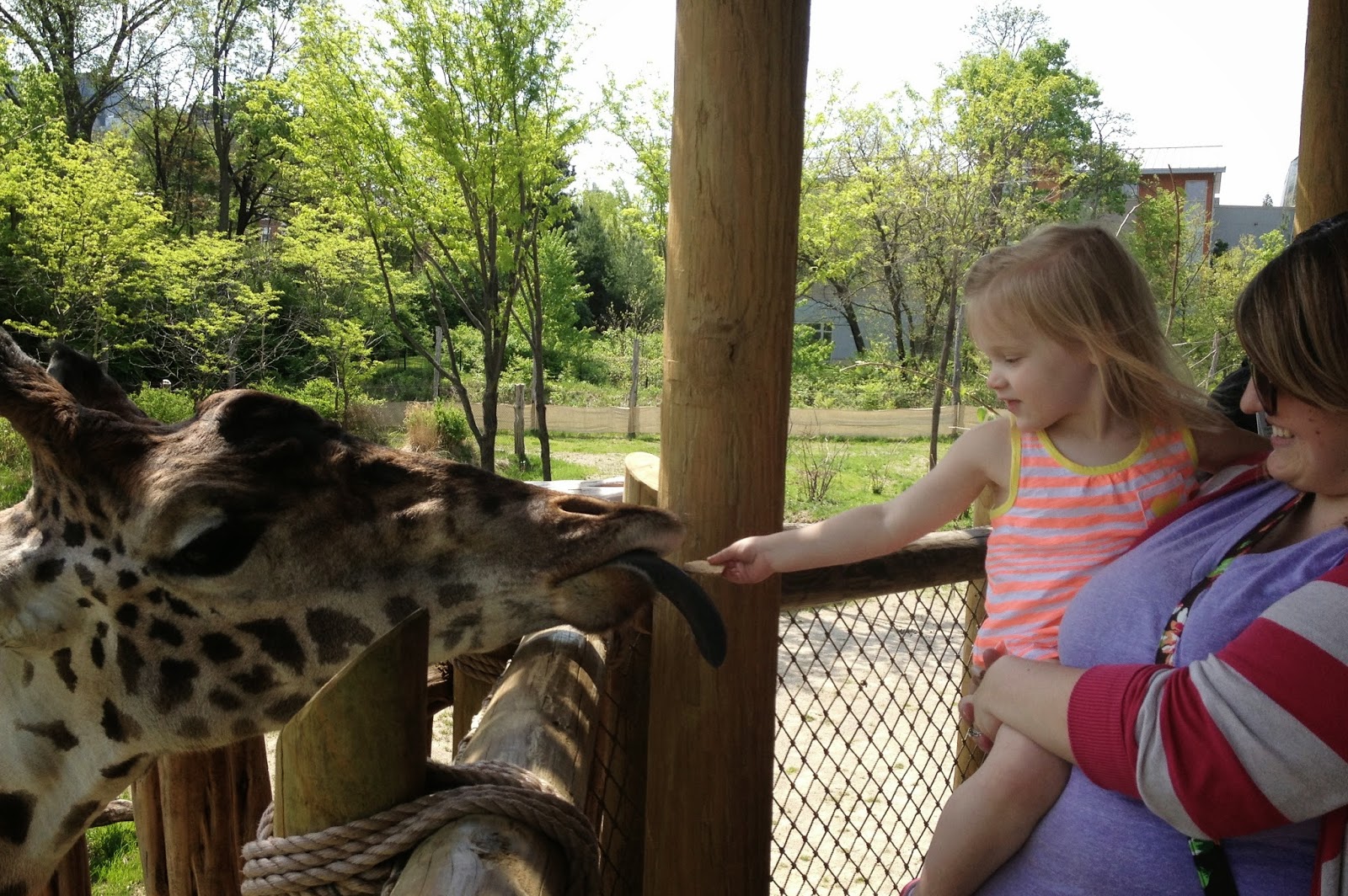 On a totally unrelated note, I just feel like this guy really knows how to "do" life.  Am I right? 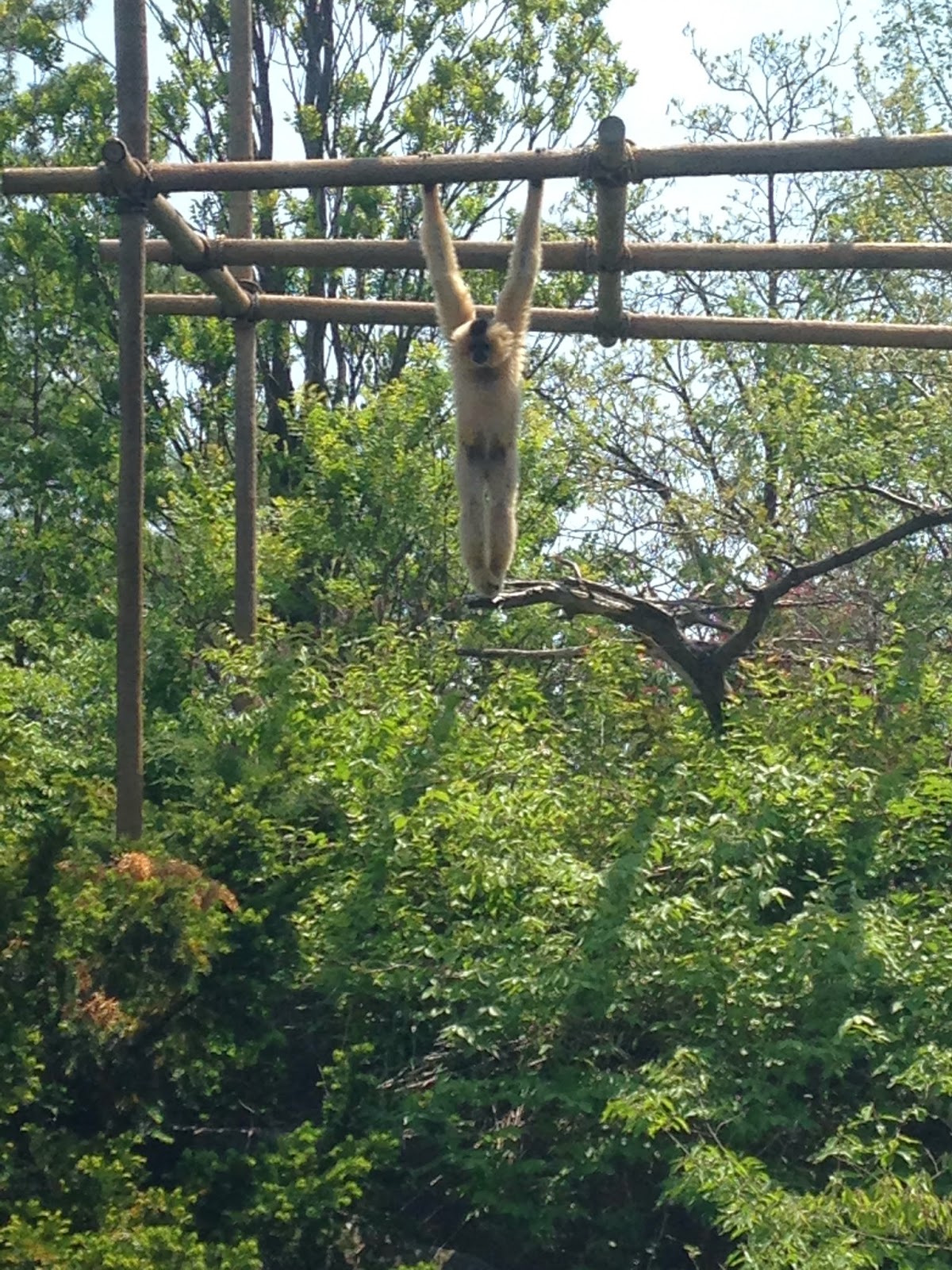 I just spent the entire day being really grateful.  I realize, as someone who, according to this study, had around a 15% chance of surviving, I take way too much for granted, but every year, on this day, I try to be grateful.  Wow.  Is it just me, or was that a lot of commas?

My sister's kids (Lucy, 3 & Lucas 3 months), are doing a fantastic job of representing light and magic and joy and everything that is good in the world.  (As most children do, I don't want you thinking I am that delusional about my niece and nephew. Ha.). 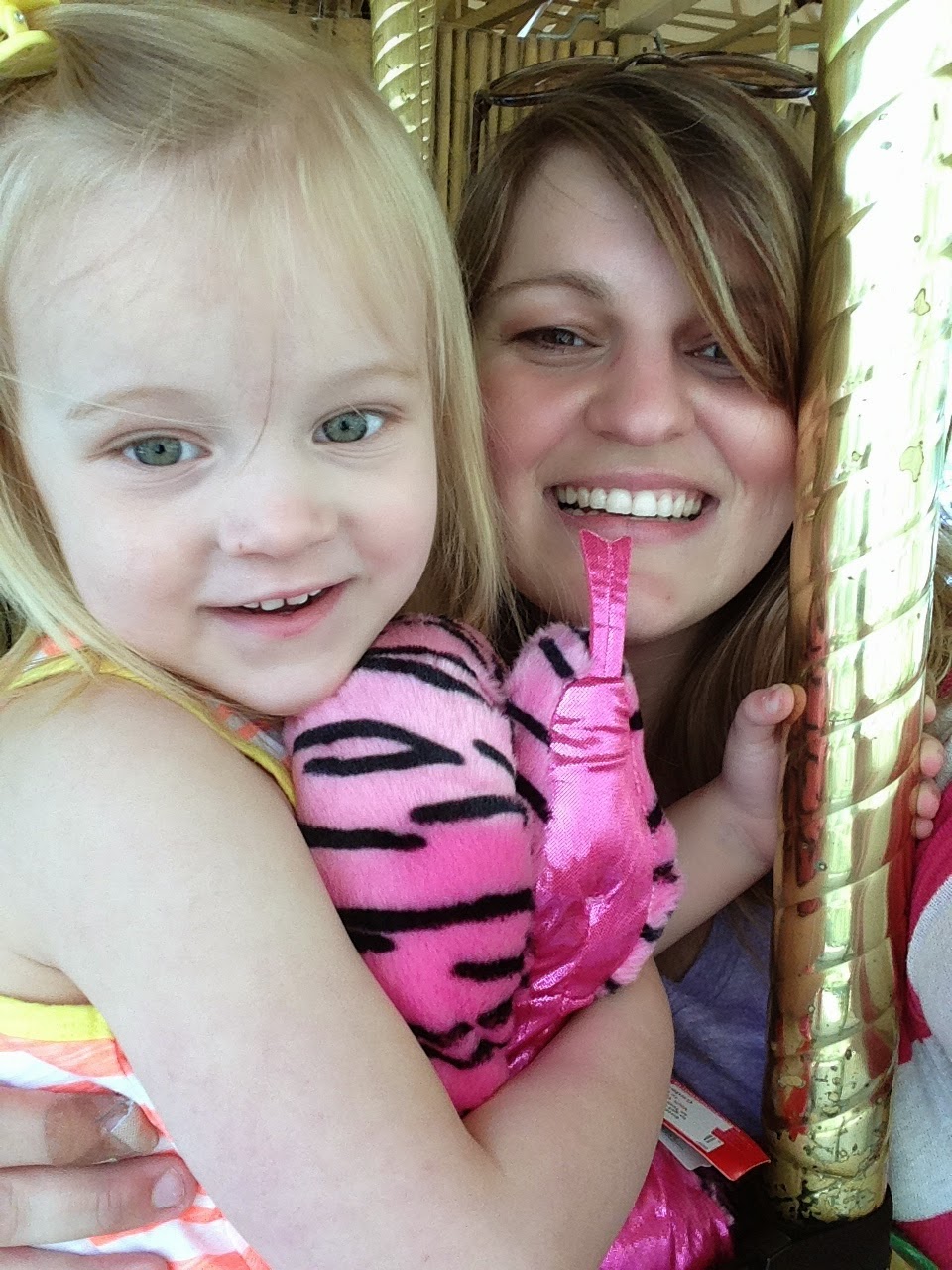 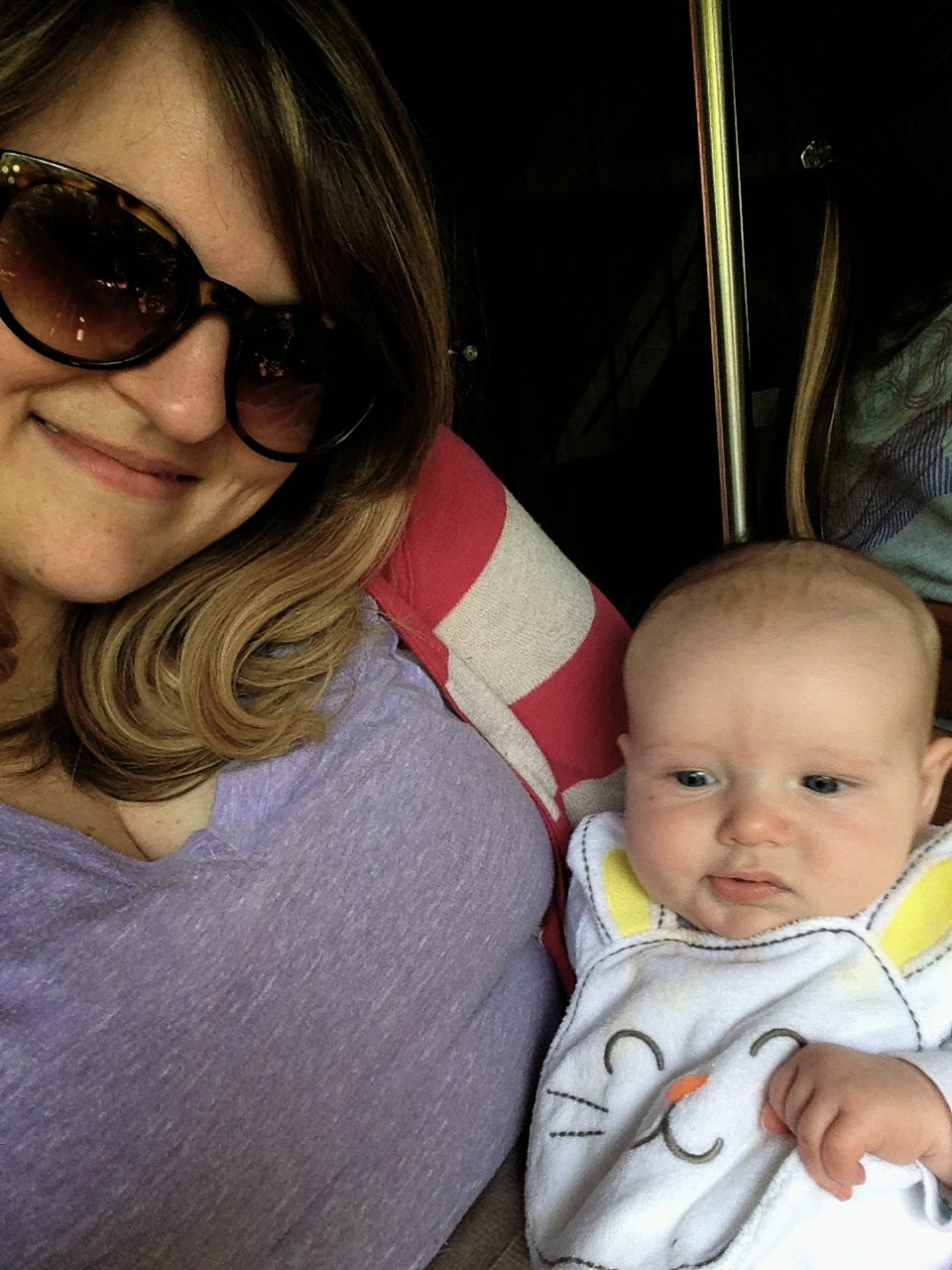 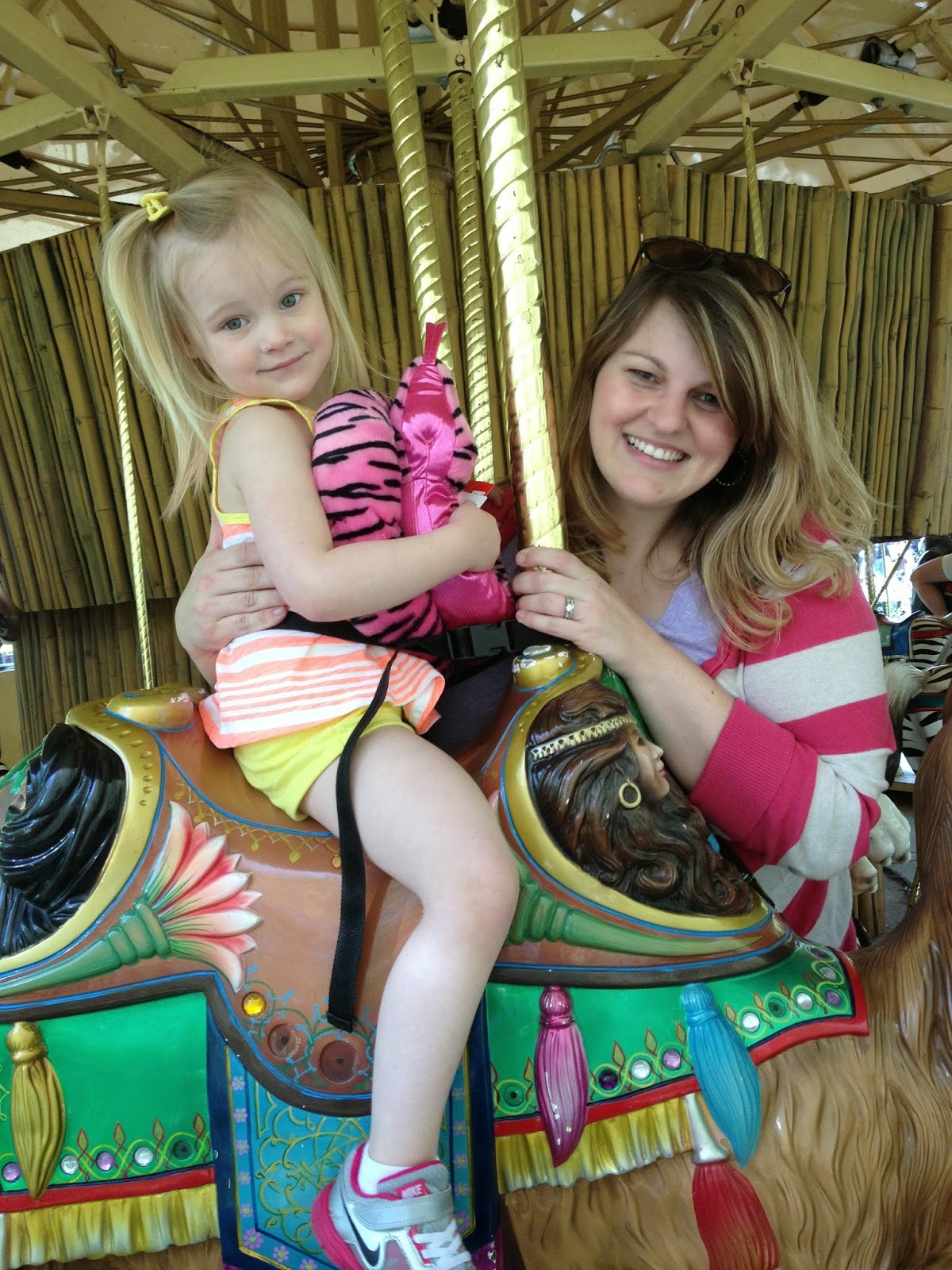 So. I'm just happy.  I feel like I've gotten  a 9 year bonus and today I just want to squeeze everyone.

I want to squeeze That Tim. Hard. When he gets home, that's probably the first thing I'll do.

You can read a previous "Old Joy" post here.  I must just really like the zoo, I guess.

*Side story.  Lucy is really into "Mommies, Daddies & babies."  She got this huge, purple snake at the zoo last week...then my mom gave her a little snake so she used her piggy bank money to buy this matching pink snake today.  I don't know why I find this hilarious.  Baby snake's name is "Hamill?"  and mommy snake's name is "Flincher."

I said Lucy is really good at coming up with Hipster Baby Names.

"Hello. These are my children...Flincher & Hamill."

Ha.  Do you think Flincher is the boy or the girl? 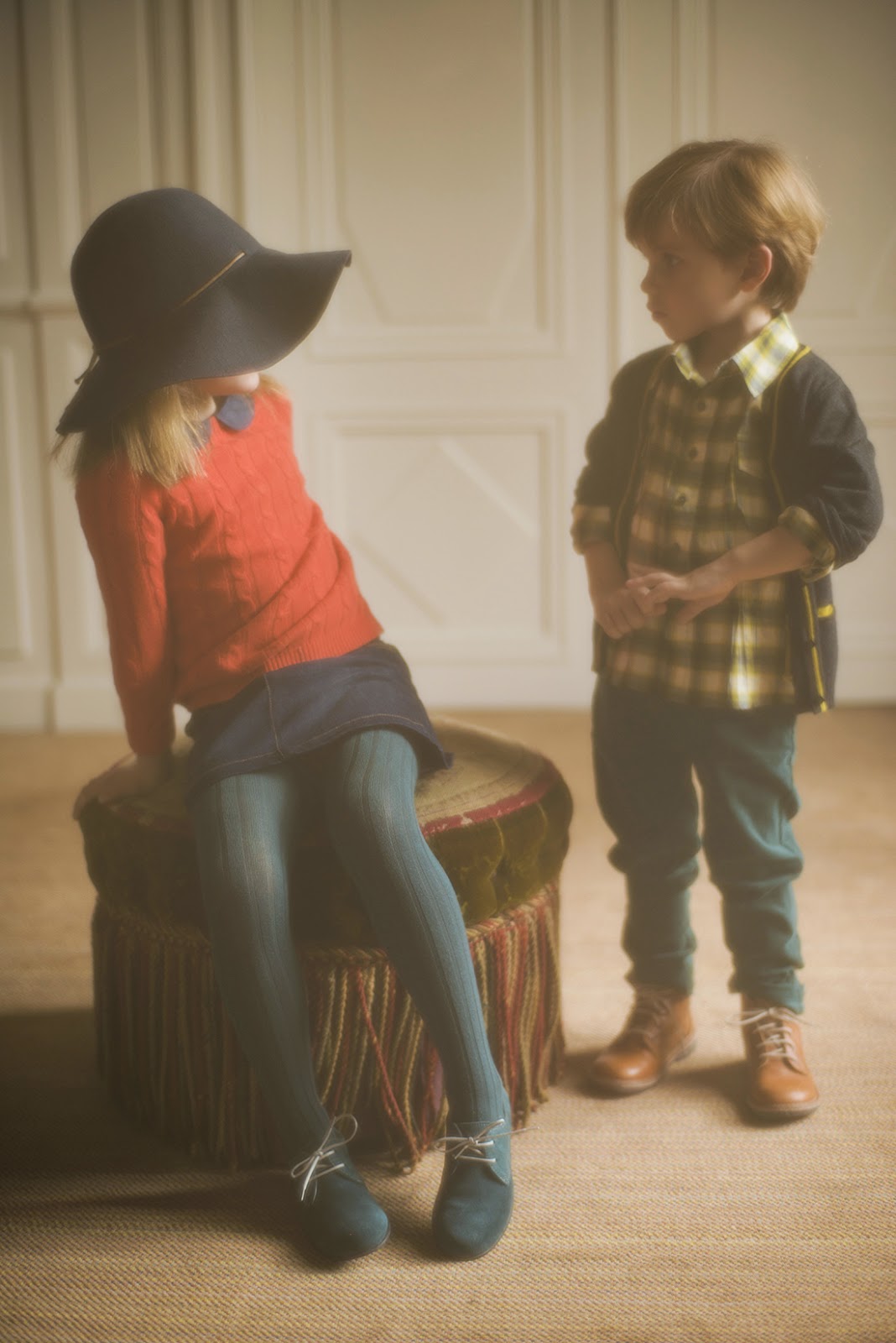 Love & I'll squeeze you, too...if you're into that sort of thing.  The line starts here. 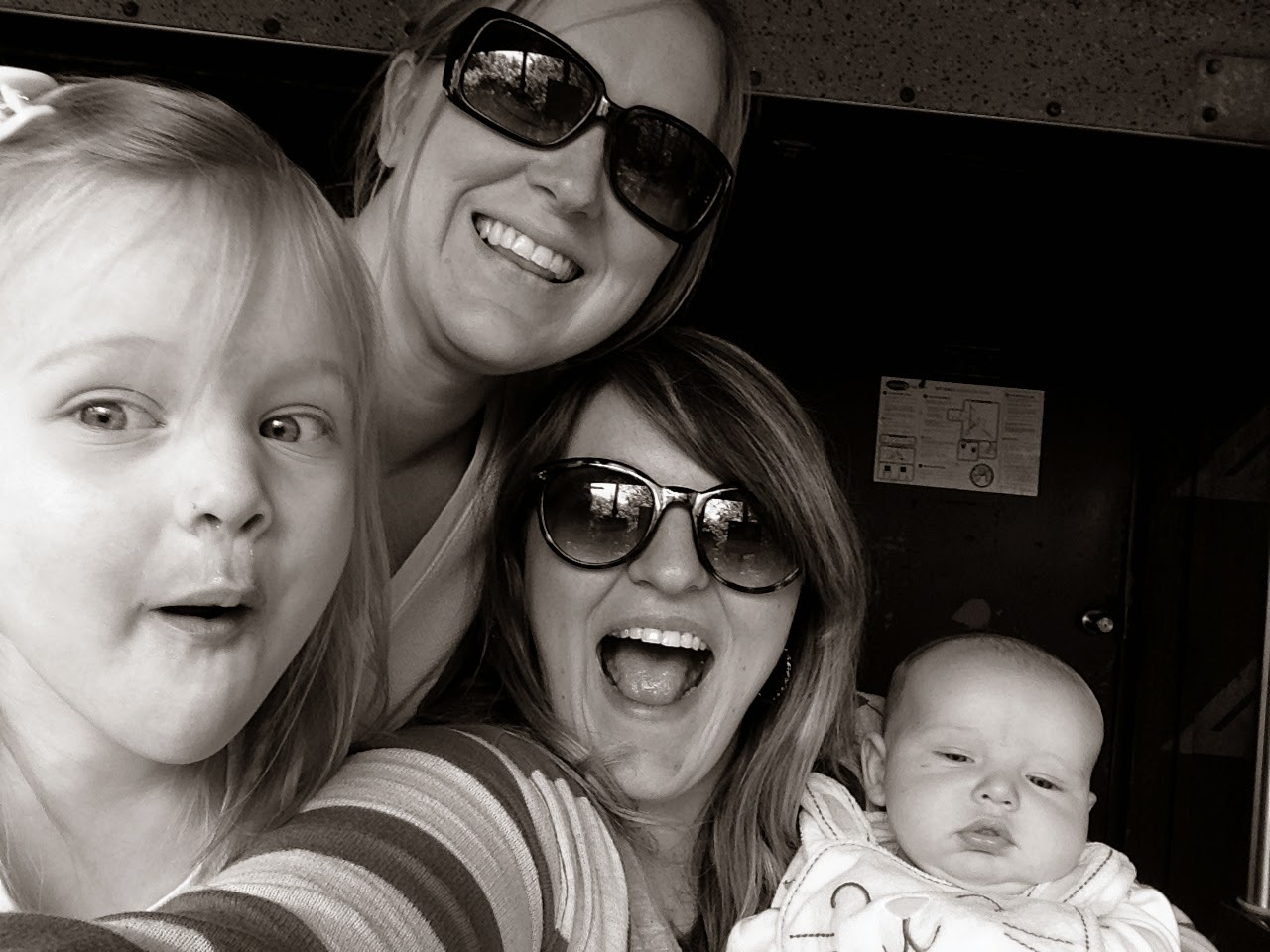 P.S.  Sarah from @Girlgrows up was our Bondbons giveaway winner!  :)  I'll notify you privately with details about claiming your prize! 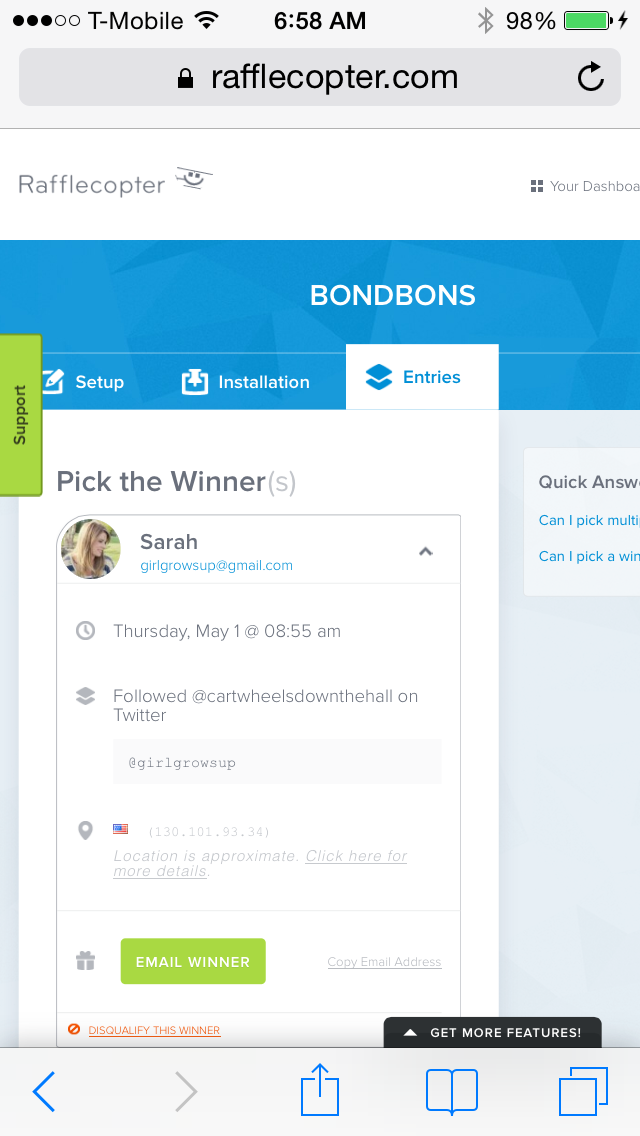