Exactly one month from tomorrow, I will turn 30.

I am, as Sabrina Ward Harrison would say, feeling the feelings of my age.

I'm not saying that I am feeling old.  I am grateful.  I think complaining about your age on milestone birthdays is completely overdone.  It's better than the alternative, right? 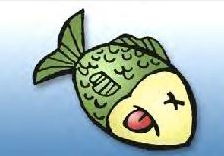 However, the older I get, the more it seems I have to lose...and the seemingly LARGE things seem less and less important.

But like I said, the more I have to lose.

And I realize right now, I am writing an awful lot without actually getting to the point.

And then I posted a dead, cartoon fish.

I am realizing that life is a collection of Very Small Moments and Important Decisions we hold close to our hearts.  Kent Nerburn would call them Blue Moments.

They are the cards we view with our elbows tucked in very tightly.  Wrists turned in.

I don't know about you, but I don't tend to talk about These Moments very much.  Not because they aren't worthy of mentioning, but perhaps quite the opposite.

They just seem sacred.  I guess.

The first time I held Lucy.  My first morning in Hawaii with Tim (Yowza).  My lone trip to Starbucks the night before our wedding.  Et cetera.

But today, I will show you part of my hand.  I've got a card, it seems, that is no longer relevant.  Like bringing an UNO deck to a game of poker.

In case you didn't know, Tim and I are extremely private about our family planning.  It's not something we like to address with other people.  It's too much pressure.  And it feels weird.


And it's fun you know?  Having a secret.

For a long time, we said we were going to start trying to have baby the spring I turned 30.

And then last-last January, Tim lost his job.

And a year passed.

Then, February hit...and then March, and with each passing week, it became painfully obvious that this little plan of ours was slowly becoming non-existent.

To the point that we don't even talk about babies anymore.

And I realize that the thing about babies is that you start to miss someone you've never even met before and then all at once, you have lost something you never even had in the first place.

Which, I'm well aware, is CRAZY.

People are strange animals.  We are the only creatures in the world that miss something we've never experienced.

Who in the world invented that game?  It's daunting.  Really.

And for heaven's sake, people are rude, ya'll.

Can we please just commit to no longer asking everyone else about their baby-making?

You don't go walking around saying, "Hey, when are you going to finally get that promotion that no one is even sure you are trying for or that you even want?"

"Hey, when are you guys finally going to pay down that pesky credit card debt that you have never spoken to us about or that isn't really any of our business?"

We don't talk about things that people may want, but are ultimately out of their control. Except when it comes to babies.   No one "tsk-tsks" because you can't seem to sell your starter home or land that dream job, but put off having a baby and you'll find more naysayers than you can shake a stick at.

I think this is a good general rule.  If you absolutely must comment about procreation, do not do so  unless you are such a close friend that you have this person's birthday memorized.

I am 100% ok with Baby Talks if you can tell me my birthday.


But don't cheat, cause' I just told you my birthday is next month.

Once, I heard a passing comment that maybe us baby-sitting Lucy would get us "on the ball" and encourage us to have a baby.

Your words hurt, People!  They hurt!

We don't need encouragement.  We need a second source of income.  Thank you very much.

And the older I get, the more I realize how hurtful those comments can be- what if I had had a miscarriage?  What if I was struggling with infertility?

I'm just kidding.  No one's a jerk.  I just felt like I needed to put an insult there.

UN-fertility.  Is there such a thing?  In this economy...in this housing market... there have got to be thousands of other women who are experiencing this...?

It is a sad & interesting place to be.

We don't have a plan anymore.  Plan A did not work out, but we certainly aren't out of letters.

Tomorrow, I will be sad.

I will probably cry in the car as I am sometimes prone to do.

Not only out of sadness, but also because of that unrelenting need to surrender.

You've been there before, too?

Next month, we will celebrate.

Holly, Sending you a giant hug! You are right that many people are rude when it comes to unfertility, infertility and the subject of pregnancy and babies in general. Who said any of that is anyone's business?! Many assume it's something you just snap your fingers for and bam! it happens.
I have done the same thing comparing myself to when my Mom had us kids (all 3 by age 23!) and while I never wanted to have my boys that young, there have been many times where I have felt sort of behind. Like when we tried for a year with no success and I was really panicking because everyone I knew got pregnant within the first couple tries. I know that I actually waited a much shorter length of time than many do but in the midst of the waiting it's so easy to question and mourn what you don't have. I really struggled at that time in my life.
I will be praying that that second source of income happens very soon!

Girl. I hear you on the comments. It has challenged me VERY MUCH to remain gracious in spite of those comments. Ugh. I think your rule is a good one because I doubt most of the people who ask me about when and why not we're having a baby don't even know my first name, let alone my birthday. Oh well. Lessons in grace is all I keep telling myself :)

This is so true. I agree with you 100%. Everyone is different and fitting into a mold is not necessary. Everything should come at its own pace for each person / couple. I have a lot of family who pressure us too. But I have family who tell us NO WORRIES!! Babies will come, eventually.. be happy together first.

I'm glad I'm not the only one who has such issues.

Thank you, sweet sweet ladies for your words of encouragement!!! I'm actually finding that we're having a lot of fun now that we've let go of all our "plans." We are living like newlyweds again (yowza)....making travel plans...redecorating...all those things that are harder to do once you have kids. It's kind of refreshing in a way I didn't expect.

Thank you so much for reading and taking the time to comment. It means more to me than you can imagine! :)

Thank you for your honesty, and i shout out a big "AMEN, PREACH IT!"