Do I have your attention, yet?

Over the summer, after some prompting by my friend, Courtney, I read a magical little book called 7 by Jen Hatmaker.

Long story short, the book details Hatmaker's attempt at getting rid of the excess STUFF in her life.

No area was safe.

In less than a year, Jen overhauled her life...de-cluttering everything from her closet to her pantry to her wallet.

An excerpt from the Book Trailer explains,

"By living a deeply reduced life, [her family] hoped to discover a greatly increased God."

And this tiny little book has changed my life. 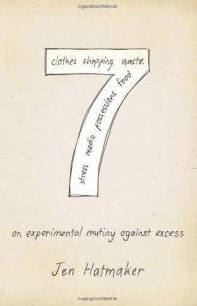 I feel super cheesy saying that but...

In the words of Salt n' Peppa, Let me take you back to the subject.

My mother is a saint.  She is a saint.  I have called her, many a times and bemoaned.  That's right, I have bemoaned, in reference to not being able to keep my house clean...

"WE JUST HAVE SO MUCH STUFF."

It's a real treat.  Surely.

In my experience, when in need of a picture that represents the word bemoan, the best thing to do is Google Image, "Girls crying on The Bachelor."

My conversations with my mother sometimes look a little like this: 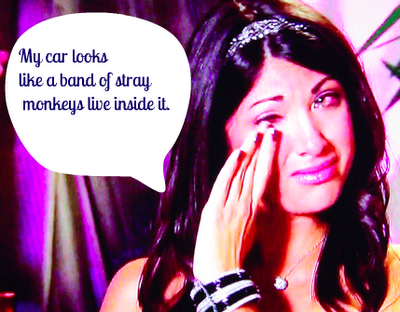 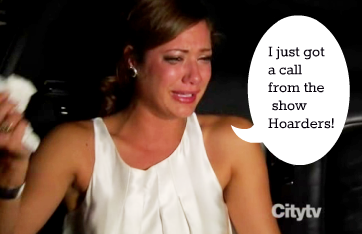 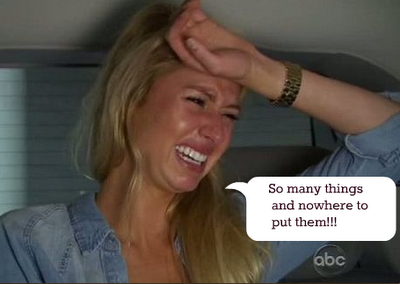 I am so completely embarrassed to admit this, but the fact that we have so much STUFF overwhelms me to the point that I do wonder, "How are we ever going to make room for a baby!?!?!"

And then comes the guilt.

The Guilt comes when I start doing The Math.  You know.  Math.

How are we TWO people who have lived in a THREE bedroom house for only FOUR YEARS and we have already outgrown it!?!?!?!

And Guilt always brings his pal Fear along for the ride.

Fear that I will stay overwhelmed and motherhood will just amplify the fear and the guilt and the stuff.

And it never occurred to me to get rid of any of it....

Until I read 7....and got real about the STUFF that had crept into our lives. And the money we were spending on STUFF we don't really need....or even want in the end....?

And I started doing a new kind of math.

I'll give you a few examples.

This summer, I have discovered that we own the following, ridiculous items:

And then I honestly quit counting everything and just started trying to get rid of roughly 1/2 of everything we own. (I'm kidding. Kind of.)

But seriously.  The towels alone were enough to do me in.

We are Tim and Holly Young, and sometimes, when we are in a pinch, we use beach towels for our bath towels.

There have been many days when Tim has a towel and I have a towel...and that's it as far as clean towels go.

THAT MEANS THERE ARE 13 OTHER TOWELS IN OUR DIRTY LAUNDRY HAMPER.

There have been times when we are down to our last sheet set.

WHICH MEANS THERE ARE 13 TOWELS AND 4 OTHER SHEET SETS IN OUR DIRTY LAUNDRY HAMPER.

And there are people who don't have towels or sheets or beds for that matter.

Are you with me?

No wonder I am stressed out and cluttered and childless.

Holy Smokes, I need some iced tea. (Ironically, I just gave away our iced tea maker).

And because the book is about more than just our STUFF...

I am taking my own grocery bags to the store. I am trying to (more often) strip our grocery budget to the bare bones so we can donate the difference.  I am researching re-usable...everythings... from straws to produce bags to baggies.  We're researching rain barrels.

It's really kind of amazing.

I don't say all this because I want people to think we are good and noble and awesome.  I don't want a medal or a sticker or a prize.  I just want...?

And to always have the realization that someone, somewhere is *literally starving to death* flying on my radar.

And the willingness- and know how- to help.

And for my baby not to have to sleep in a dresser drawer surrounded by my husband's socks.

I don't think that's asking too much.

With that being said, again- inspired by Courtney The Kind, I am purchasing my own copy of 7 and one to give away as well.

Tomorrow night (8/8), I'll choose a number using random.org, and that person will win their own copy of the book.

I'll count the Facebook comments first and the Blogger comments next.  i.e., If there are 10 FB comments, but you are the first Blog comment, your number in the drawing would be 11.

If you want to tweet about it, FB about it, reblog this, or write a letter to your grandmother, that's cool too.  Feel free to holla' at me in the comments section below or on FB and that will win you an extra entry....or four.  I'm not real big on putting rules on these kinds of things.

I just tried to give away my husband's Dreamcast.  It's not going well.

Love and whose got a couch I can sleep on?
H. 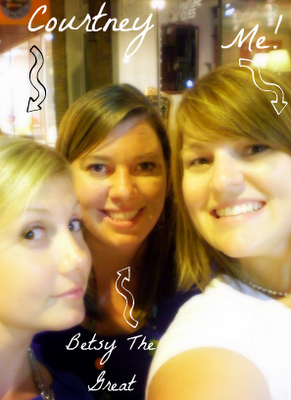 Hunky Husband and I just got married 2 months ago, and we're having stuff problems. Lots of stuff problems. We're living on site at his Bible Camp, so space is limited and... well, its become overwhelming.

This book has been on my reading list for a couple of months,and I think I'm a little scared to read it because these sorts of things have a tendency to change my life. But then I read your post, and well... shoot, here I am trying to get a copy. Ooops.